This image accompanied an interview of Warren Buffett in Forbes magazine, June 2, 1997: 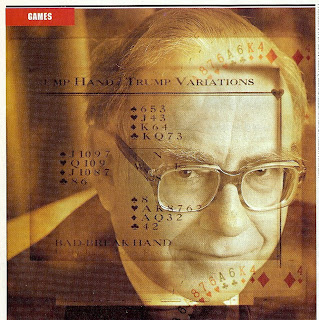 The short piece below is taken from that interview:

Sophisticated players recognize bridge as a game of probability -- like the stock market. "It's a game of a million inferences," Buffett explains. "There are a lot of things to draw inferences from -- cards played and cards not played. These inferences tell you something about the probabilities.

"In the stock market, you don't base your decisions on what the markets are doing, but on what you think is rational," Buffett says. "In bridge, too, if you always do the rational thing, you'll be a winner over time, though not necessarily that (session)."

He adds: "Bridge is about weighing gain/loss rations. You're doing calculations all the time. It's also a partnership game. You can mess up your partner or bring out the best in him. You can't win alone.

{The partnership aspect is one of the biggest differences between bridge and poker.]

"It takes a while to get the hang of (bridge), but that's what makes it a terrific game. There are always new levels."

I interviewed Buffett and his partner, Sharon Osberg, in Las Vegas in 2008. I'm glad to say he's a down-to-earth type guy. He doesn't usually leave Omaha NE, so I asked him what he was doing there (besides playing bridge). He said he was meeting Bill Gates (another bridge enthusiast), and was arranging to give some money to charity -- he wanted to do it through the Gates' Foundation.

I took a cute photo of Buffett and Osberg that you can see if you click here.
Posted by Memphis MOJO at Tuesday, February 16, 2010