Once there were two

Serious bridge players belong to the American Contract Bridge League, known as ACBL for short. Originally there was there were two leagues: the ACBL (headquartered in New York City, later Stamford CT and then Memphis TN) and the Pacific Bridge League, founded in 1933.

The PBL consisted of 11 far-western states, the Canadian provinces of British Columbia and Alberta, and the U.S. territories of Hawaii and Alaska. Collaberation between the ACBL and PBL began in 1940 when they standardized their masterpoint systems. It became known as the Western Division in the Forties and as the Western Conference in 1956 when it merged with the ACBL.

The ACBL is moving to a new headquarters, so I've been going through old files in my office. I ran across the below (and gave it to our archivist): 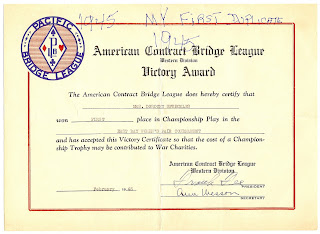 If you click to enlarge the above, you'll see a masterpoint certificate that was produced on a typewritter and signed by hand. Notice the Pacific Bridge League logo on the top left.

This lady moved from Las Angeles to Florida. When she did, the Pacific Bridge League sent her a telegram! That is so, um, well, 1950s I guess: 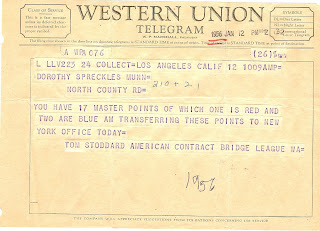 Were you aware that they used to have blue points? I sure didn't know that, but if you click on the image above, you can see that among this lady's 17 masterpoints, one was red and two of them were blue.

I also saw another masterpoint slip from 1945. The lady had won a tournament and was given a certificate in lieu of a trophy in deference to the war effort.

One of the great things about the new ACBL Headquarters is that it will have an interactive museum. The new office will open in March, but the museum won't open until sometime next summer. The bridge Hall of Fame will also be expanded and improved. Plan to come by our new offices when things get settled. If you come, I'd love to renew old friendships. If I don't know you, I'd love to meet you.