WSOP Circuit is in Tunica 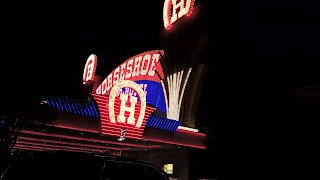 Above: The Horseshoe Casino Tunica.

I try to make it back to the Memphis/Tunica area each year in late January for the WSOP Circuit. Normally two events would be my limit, but this year I might go for three, ha.

The first event was Thursday -- a ring event but one day. There were 332 runners with 36 being paid. About half-way through yesterday, I picked up 4s 2c UTG +1 and opened for my standard raise. This hand has been made famous by The Poker Grump (http://pokergrump.blogspot.com/) who has proven time and again that it's the strongest opening hand in poker. It folded to an old man in the big blind who called. The flop was A-5-3, all clubs. The old man checked and I made a healthy bet and he min-raised me! The min-raise let me know he liked his hand, so I shoved.

The old man turned over As and Kc, about what I thought. He probably thought he had 9 outs, but notice that the 4c gives me the steel wheel. The turn and river were red cards and I had my double up.

After the hand, there was a lot of buzz at the table, but nobody said wow, you raised with a 4-2. Instead I heard "The four two came through for you, what a hand," and similar comments. Poker players, you gotta love them.

There is a reentry thing with multiple starting days and I'm going to play in it tomorrow with finals on Sunday. If I don't make the finals, there's a Seniors on Sunday for me to donk around in. Love my senior events, as readers know. Next Wednesday, there's a monster stack that I may stick around and play in, we'll see.
Posted by Memphis MOJO at Friday, January 19, 2018