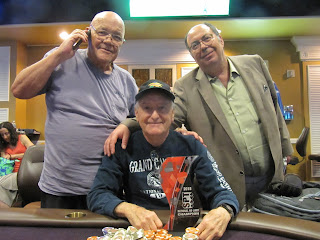 Above: My MOJO was working Sunday in the Senior Poker National Championship.

In a comment of a previous post, lightning36 said, "In geezer tournaments, he is da man!" We all had a good laugh until the finals of the Senior Poker National Championship Sunday. We played down to three players and agreed on a chop. I won't go into the details except to say I asked for the trophy as part of the deal, and you can see it in the photo above. Nobody's laughing now except moi.

Needless to say, this was an exciting ending to a trip where I felt I was playing well, but didn't have much to show for it. As we all know, poker is a skill-based game, but you still need some luck at the right time. That's what makes poker such an amazing game, and if you can't embrace the luck factor, poker may not be for you.

One quick deal. When there were two tables left, a guy limped in, I raised and villain called. By now the pots are quite worth fighting for. The flop came jack high. The villain checked, and I bet about half the pot, villain called. The turn card was a blank and I bet again. Because the pot was getting large, so the bet was large. Villain thought for a long time, showed his jack and folded. I was rather happy to win this since my hole cards were ♦6 ♣2. Sometimes it pays to have a nitty old man's image.

The SPT took their own photos, but the pics and the results aren't posted yet, so no link. I'll try to remember to update later when it's available. 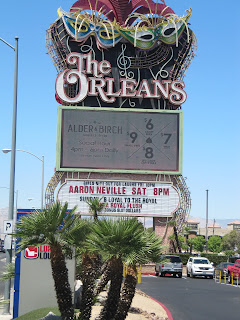 Above: The Orelans Casino Las Vegas was the site of the Senior Poker National Championship.
Posted by Memphis MOJO at Tuesday, June 26, 2018