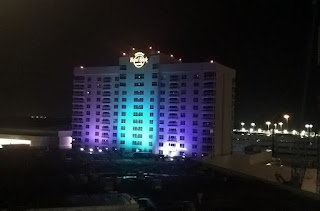 Above: The Seminole Hard Rock Tampa is the venue for the Tampa Poker Classic now being played.

If you read poker blogs or are an experienced player, you probably know that the deuce-four is the strongest starting hand in poker. Cyber-friend Bob Wooley, also known as The Poker Grump, has espoused its magical powers for many years, so we affectionately call the deuce-four The Grump.

I won my largest pot during the qualification yesterday with, you guessed it, The Grump. The big blind was 1000 and there were three limpers to me on the button. I looked down to see ♠4 ♣2. I could have raised, but decided to slow play and just called. Both blinds came along and the pot was 7000 (big blind was 1000).

The flop was ♣3 ♥3 ♦5. A player bet 4000, one player called and I just called. The turn was the ♦A -- was there ever any doubt? The same player bet 6000, the second player folded and I sprang my trap by raising to 13,500. The villain called and the river was the ♠10. Villain checked and I bet 15,500. The villain went into the tank. This was the last hand before the break, so others left the table. Finally he called and I tabled my hand.

Besides winning a huge pot, the look on his face was priceless. Obviously, he hasn't heard about the power the The Grump. I went to the bathroom, and came back to the table. The villain was sitting there with a dazed look on his face, like he'd just been run over by a Mack truck that he didn't see coming. Maybe he'll learn, but perhaps not.

UPDATE: Finished 20th for $2593, See here. I had hopes for better. Why does winning money not feel good?