Try to be positive, even when you lose 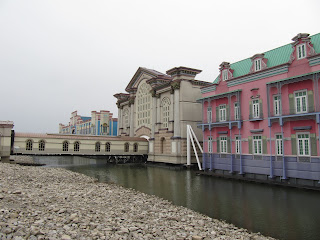 Above: The Harrah's Casino Tunica was the venue for a WSOP Circuit Event that concluded today.

Here's a quote from Lauren Alaina: "I didn't lose, I got second place. There are a million people who would love to be in my position."

Yes, I came in second in the WSOP Circuit Event No. 12 that concluded today. Usually, I'd feel a big fat let-down, but, honestly, I never had a realistic chance to win. I chipped up nicely early, but never a huge stack.

When we got to the final table, two big stacks got into a bidding war and were all in. One turned over K-K and the other A-A, just as anybody who was watching would have predicted. The turn was a king, and this guy now had a humongeous stack. He took out another big stack when the other went all in with 4-4(!) and he called with A-K. At one point, we were seven-handed and he had more chips than the rest of the table combined.

I played cautiously when big stack was in the pot. There was no pushing him around, so I tried to get my chips elsewhere. With four left, he eliminated a guy who flopped top pair. Big stack was on a diamond flush draw that got there. Then the other big stack went all in with A-10 and was called with ♣3 ♣4. Sure enough he rivered a straight and we were heads up. Big stack was fearless.

At this point he had 2.1 million in chips, I had 380K, ouch. I went all in on the first hand and he folded. I went all in again on the second with ♣J ♠9. He called with ♠J ♣K, about the worst hand I could run into. I whiffed and it was over in two hands.

That sounds like I went crazy, but if I double up to around 800K, then double up a second time, I'm the chip leader! There's no point trying to play regular poker -- his chip lead is too great. Better to get lucky one or two hands in a row, then revert to a regular game.

“Second place is not a defeat. It is a stimulation to get better. It makes you even more determined.” -- Carlos Lopes

Thanks to everybody who left supportive comments. It meant a lot. 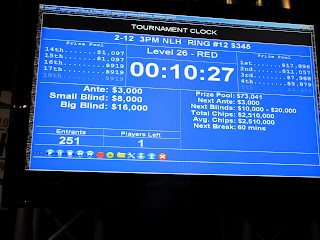 Above is the shot clock when the event concluded. Click to enlarge.
Posted by Memphis MOJO at Monday, February 13, 2012