It's nice to get some rungoot 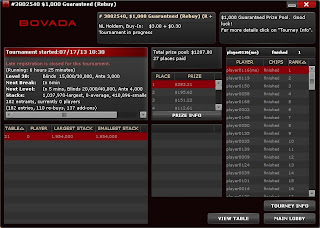 I've been running meh on Bovada -- lots of min-cashes or near-misses. When I logged on this morning, two bridge players from Raleigh (Wayne and Lance) were there, and we all agreed to play the $3.30 rebuy and add-on at 11:30 CDT. For $3, donkeys players get T2000. For $3, you can rebuy when your chips are 2000 or less. Most players do that, but we didn't.

The three of us waited until the first break, then entered and did the add-on for a total investment of $6.30. The add-on gives you T10,000, so why do the rebuy? In fact, why even enter before the break unless you intend to play tight as a clam.

One of my buddies did the Annette Obrestad thing: he covered his hole cards and played position and stack sizes. He lasted a couple of hours, but finally busted out. The other guy went deep, but went card dead, then was eliminated when his 10-10 lost to A-Q. You gotta win the flips as a certain blogger says.